There comes a time after climbing some tough summits when you decide to look at the weight of your backpack. I had  recently walked 20Km to activate a summit in the Snowy Mountains, towards the end of the walk my backpack just felt too heavy. I had stopped on several occasions to rest and I remember thinking “I have to lighten this pack!” The radio I use for SOTA activations is a Yaesu FT-857, it weighs in at 2.5Kg. A great radio which covers all bands and produces 100w output. I also have a Yaesu FT-817, by comparison it weighs only 900 grams without battery pack. I hardly ever take this radio on SOTA activations since I prefer to run about 30watts output and the 817 is lucky to produce 5 watts! I had thought about building a lightweight amplifier to boost the output of the 817 to around 30watts. I looked for suitable components on ebay and this is where I discovered the MX-P50M amplifier. It was advertised specifically to suit the FT 817  and produce an output of 50 watts at a mere 500grams.  My first thoughts were, “this might be one of those dodgy cheap amps, best to be avoided !” With that I decided to move on and continue looking for parts to build my own amp. I found many parts and kits available to build a small amplifier however I was curious about the little amp I had seen. I decided to do a Google search on the amplifier, I found only one positive report on eham and no other information, no circuits nor operation manual. For the asking price ($226 delivered) I decided to purchase a unit, thinking if it did turn out to be dodgy, I would simply use the components to construct a better amp. It took only a week for the amp to arrive from China. The amp ships with a DC cable, an FT-817 control cable and nothing else. No instructions, specifications or circuit! 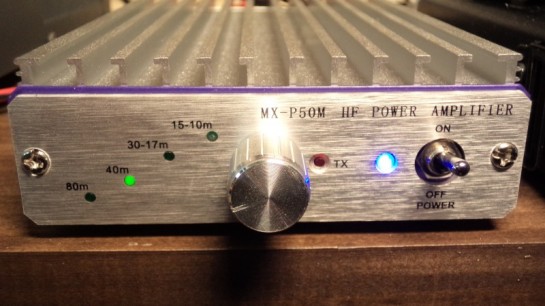 Setting up the amp is relative easy, simply connect the supplied control cable to the FT-817 accessory connector and the DC cable to a 13.8v supply. Then connect the coax output from the radio to the input of the amp. The output of the amp connects to your antenna.  The amp has a manual band change switch, so check the band switch is set to the correct position before transmitting.  Not having any specifications, I had no idea what power level could be expected. I connected a power meter and dummy load in line and decided to test initially on 40M. 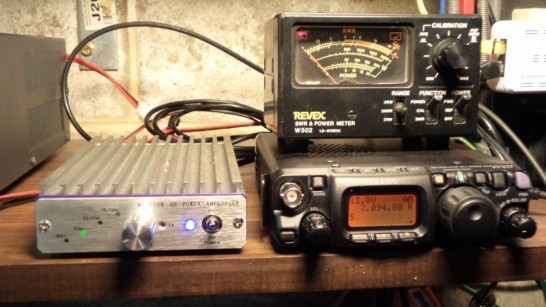 Applying 3 watts AM carrier from the FT-817 produced 30Watts indicated on the meter.

On SSB a whistle into the mic produced 50watts indicated. So far so good, I proceeded to try the other bands and was delighted to find I could produce 45watts PEP at 28.5 Mhz and 50 Watts PEP on 3.585Mhz, Note the voltage reading of 13.3v. 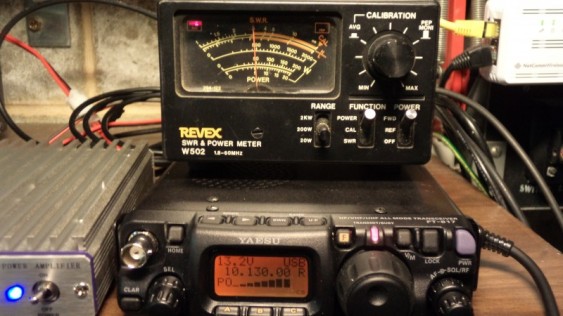 Here you can see the full output from the FT-817 producing a healthy 50watts PEP on the 30M band. I conducted tests at a higher input voltage (14.5v) and found the amp can produce more power output if required. I did find some specifications for the encapsulated  RF device inside the amplifier stating it can accept input voltages up to 24v to produce 100w output. I am not going to try it, the results could be catastrophic! 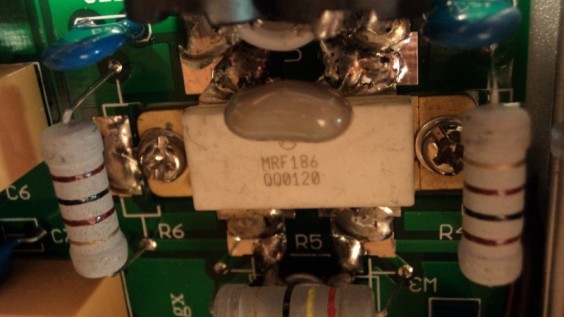 The MRF 186 encapsulated RF device as used it the amplifier. Also an internal view of the amp, showing the filter layout and circuit arrangement.

Having tested the amplifier into a dummy load it was time to put the amp “on the air” I started with 40Metres and called CQ with 5 watts only. Vin, VK3FMOL replied and reported a 5×4 signal received at his location. I asked Vin to check my signal strength again this time with the amp on line. My signal report was now 5×8, but more importantly Vin said my audio level had increased quite a lot to the point where I was readable above the noise.  At that point Scott VK7NWT broke in to provide his report. He had been listening and was happy to report the same, an increase from S4 to S9 with a large increase in received audio level. Scott also reported he had tuned across my signal whilst I had been talking with Vin and could find no evidence of splatter or bleed over, thanks Scott. Seems like this test had a few people interested because Ray VK3NBL was next to call in and report he had no particular signal increase but a noticeable audio level increase. Ray had also been looking at one of these amps, but like me was dubious about the quality. As it turns out I had contacts with four or five others whilst using the amp and all the reports were similar, a noticeable increase in audio level and no change in quality with some reporting a signal strength increase also. During the tests I noted the amplifier remained cool to the touch and the current drain was around 6.5 amps on voice peaks.  I have been asked several times if this amplifier can be used with radios other than the FT-817. The answer is yes provided you can supply the correct RX/TX control lines into the amplifier. The amplifier is supplied with a connecting lead and attached plug suited for direct connection to the FT-817 Accessory socket. I have taken the time to check which connections are made to the FT-817 and they are as follows. The Black or in some cases Blue control wire from the amplifier is connected to ground or GND (-VE)  on the radio and the Red control wire from the amplifier is connected to TX GND from the radio. So to operate the amplifier in transmit mode it is a simple matter of shorting the two control wires from the amplifier together when transmitting and open circuit them when receiving.

Some people have asked if there is a way to use the FT-817 CAT control and the connection for the linear amplifier simultaneously. Well in fact one of those people was John Schultz who not only asked the question but provided the answer via a file he found on the net from a SK Charles Socci K1DNR. I have provided that file for download here:simultaneous-use-of-cat-control-and-linear-amplifier-on-yaesu-ft-857d Thanks John for sending me the file and thanks to Charley K1DNR.

Recently my amplifier destroyed the in line fuse every time it was connected to the DC supply. A quick investigation revealed there is an 18v Zener diode used as a form of protection circuit. This diode had gone short circuit causing the fuse to blow. I replaced the Zener with a suitable type and have not had any problems since. There was no apparent reason the the diode to become faulty, unless I inadvertently reversed the DC connection polarity. Maybe I had a seniors moment hi hi!

In conclusion I can recommend this amplifier to anyone looking to boost their FT-817  output to around 40 watts. I will continue to run  30 watts as usual. For me this amplifier will now accompany the FT-817 on my future SOTA activations. My FT-857 will be installed in the vehicle which will lighten the backpack by 1.1Kg. A good saving!